Why I still have tomatoes

I’ve talked to quite a few people about tomatoes: how their plants are spent already, and what should be the height of the season hasn’t panned out. I’m certain that all the seasons have shifted later, so that summer didn’t really start until the end of August, so the tomatoes have just started feeling the right kind of weather to really produce.

That is why I’ve been doing successive plantings of all my summer vegetables and melons. Every month, I start more seeds, even though it’s really late in the year to be starting more tomatoes. I’ll bet that I can keep tomatoes coming in through January this way, so long as we have a week’s worth of hot weather in December or January that will get them to start ripening on the vine.

I’m still trying to get more production out of my garden, not only with successive planting, but also by fighting the snails! I’ve got a snail and slug problem that just won’t go away. I won’t give up and I won’t use chemicals, though.

I had to move the Falling in Love rosebush and Yves Piaget rosebush to new spots; they weren’t liking it under our biggest tree.

Since Jillian is in school and has regular taxi service, I’ve had more time to garden and it really shows! The garden is spiffy and clean now, cleaner than usual. The novel writing is coming along flowingly, if that’s a word. I get about 2 to 3 hours of writing in each weekday. 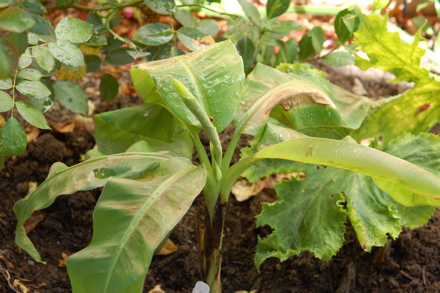 This is a dwarf banana tree that I finally planted outside after having it indoors for over a year. I can tell that it likes its new spot, because the leaf coming out of the center is growing fresh and green. Banana trees are rapid growers, but I don’t expect bananas for maybe another 2 years. And this type of tree never gets too big, and neither do the bananas. I planted it where it won’t feel a lot of wind, hopefully.

This entry was posted in Everyday life, Vegetables and Fruit. Bookmark the permalink.